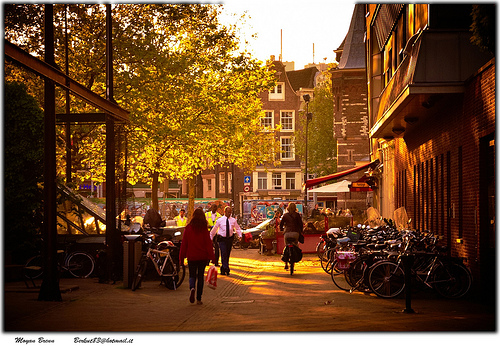 If you’re like me, when you think of Amsterdam you think of canals, windmills, and bicycles! I love cycling and since Amsterdam is the most bike-friendly city in the world that gets it on my “must-see destination” bucket list. Amsterdam has 400 km of designated bike lanes and bike paths so that’s a plus on the safety side of things too. Wherever I go I like to live like a local, so my ideal will be to explore by bike. Exploring the sights of the city by bike, either with my own guide map or by joining a cycle tour sounds so much more appealing than going on a generic bus tour. There are just about as many bikes as people in Amsterdam so I’m sure it is a bit intimidating at first but I’ll give it a go.

Amsterdam has got several very popular vegan eateries that get rave reviews for their food. The TerraZen Centre near Dam Square serves excellent food by all accounts. It’s menu contains a variety of Japanese and Caribbean fusion dishes and the desserts are to die for. It is a small, informal restaurant that gets very busy so expect to wait for a table. I love good Falafel and Maoz Falafel serves great vegetarian and vegan options with unlimited access to the salad bar :-) For a dining experience that’s a bit different I’d definitely be interested in try De Peper, which is a vegan food collective, run by volunteers. For between 7-10 Euros you get a set menu of soup and a main. Beer and wine is available to buy if you want it. You are expected to clear your plates when you’re finished which is no hardship. The whole concept sounds very relaxed and organic to me.

Another vegan food collective restaurant with a good reputation is MKZ where you can get a set 3 course meal for only 5 Euros. Both places are popular so you have to book a for a reservation earlier in the afternoon. Deshima is a macrobiotic vegan restaurant that is open late morning til 5-6 pm. The best selection of dishes is available at lunch time and although reviews of the food are very good it is a bit expensive for what you get.

There are a number of places I’m keen to visit during my visit to Amsterdam. I want to see at least one windmill in action. Although there are some windmills within the city I have read that it’s best to take the public bus 91 to Zaanse Schans (takes 45 minutes) which has 8 of them. For 3 euros you can visit a working industrial wind mill.

Kate has absolutely no interest in World War Two but I have a fascination with it, especially the personal stories of those who experienced it. I’ll be very interested to visit the Resistance Museum and Anne Frank’s House.

I imagine I’ll enjoy strolling along Amsterdam’s three major canals (Prinsengracht, Herengracht and Keizersgracht) for hours. The streets that line the canals are crammed with small restaurants, pubs and cafes and it will be fun to observe life on the canal boats and house boats. I’ve read that it is well worth going on a canal boat tour so I might splash out on that as well.

I love exploring local neighbourhoods with traditional architecture and a lot of atmosphere so I’ll be sure to take a look around Jordaan, De Negen Straatjes and Begijnhof. I hear these neighbourhoods are less crowded than many other parts of Amsterdam. Choosing an apartment rather than a hotel often enables you to stay in a less crowded neighborhood of the city, which is what we love to do on our trips.

Previous Post: 5 Tips for a Berlin Mini-Break in Your 30s
Next Post: Free Things To Do In New York Each Day Of The Week