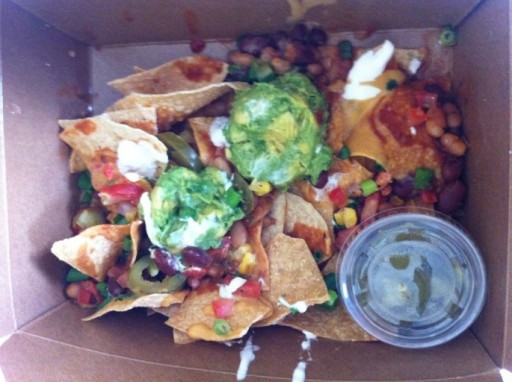 Veggie Grill is nirvana for vegetarians and vegans arriving in Los Angeles after a long flight. Lots of omnivore travelers head to the celebrity favorite “In and Out burger” the second they hit California soil. This is the same but for vegans and vegetarians.

Because I’m usually ravenous upon arrival in LA (I’ll blame the jet lag and the time difference), I can often be found parked outside Veggie Grill waiting for them to open. I’m rarely the only one!

My favorites items from their menu are

Usually I don’t go for any “fake meat” and I generally prefer vegetarian burgers that don’t attempt to mimic a meat burger. However, the vegan cheeseburger at Veggie Grill is just like a meat cheeseburger and I really enjoy it.

The vegan nachos I usually order with extra jalapenos. The guac and vegan sour cream give them a great creamy flavor, but they’re lacking a bit of spice.

There aren’t a lot of dessert options at Veggie Grill but their carrot cake is ok. Like all cake in LA, the frosting to cake ratio is too heavy for me. I prefer a light a cream cheese style frosting on carrot cake (in general, I don’t like butter cream style frosting and prefer a ganache any day). The cake itself is pretty good though. The giant Wholefoods across the parking lot from Veggie Grill also sells vegan cupcakes and they’re horrible. Nothing like the excellent vegan cupcakes at Wholefoods in NYC.