We were a bit miserable our first few days in Mexico and I just wasn’t sure why. Sure, we were rained in for basically a 24 hour period but that didn’t seem to be enough to cause the problem. Finally as we started to feel better, I realized I’d just had a bit of culture

END_OF_DOCUMENT_TOKEN_TO_BE_REPLACED 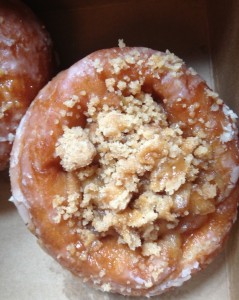 I can’t believe it’s vegan! I’ve been to the Cinnamon snail 4 times this week! My favorite items so far are the Roasted Peach Cheesecake Donut (pictured below, $3), the Strawberry Glazed Donut ($2), the Tiramisu Donut ($3, has a slight beany silken tofu flavor), and the Triple Chocolate Brownie. The brownie is so rich

END_OF_DOCUMENT_TOKEN_TO_BE_REPLACED

Soy Chorizo Pasta Our food bill seems to have halved since we started shopping at Trader Joe’s in NYC. We love Wholefoods but Trader Joe’s has a similar choice and quality of product ( albeit with their own label) and is so much cheaper. Here are some of what I think are the best vegan

END_OF_DOCUMENT_TOKEN_TO_BE_REPLACED

Vegans will often be too polite to mention things they feel uncomfortable with, but if you’re looking to make a vegan guest comfortable then here are some basics. 1. Feather free. Give your guest a feather free duvet and pillows. 2. Vegetarian soap. Lathering in beef tallow doesn’t appeal to vegans. They likely will bring

END_OF_DOCUMENT_TOKEN_TO_BE_REPLACED

Soyatoo – Vegan Whipped Cream in a Can! OMG this stuff is delicious. When I went vegan, I didn’t really think about missing cream, but it’s really the only thing I’ve been missing. Make sure you follow the directions and leave it out of the fridge before attempting to squeeze it. The can says leave