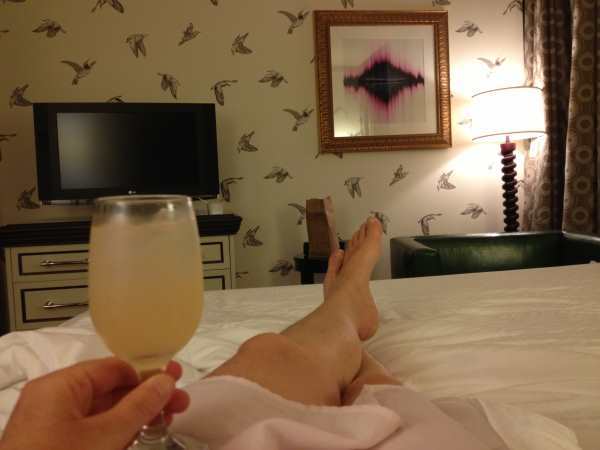 Ever since I watched the West Wing and the Leo character lived in a hotel, I’ve always been fascinated by the idea.

The last couple of months I’ve had the opportunity to live in hotels without another home.

The verdict: For a single person, it’s pretty darn awesome!

I’ve started to get fussy about a few little details.

– The size of the room, which varies a lot.

– Whether the windows open.

– Not having to launder sheets or towels!

– Swimming and hot tubbing every day.

– The coffee is always on. It seems fairly standard in the 2 1/2 star hotels I typically stay in within the US to have coffee available 24/7 in the lobby. This is in addition to the one touch coffee maker available in the room.

– Armchairs with ottomans. Now that I live in hotels, I use the seating areas much more than I used to. I sometimes work in the lobby or breakfast area, just to get out of my room for awhile. It’s fun. I like hotels so I like experiencing the rhythms of the hotel going on around me.

– I LOVE having a balcony.

What’s weird about living in hotels.

– The speed of the wifi and the price/class of the hotel don’t seem to correlate.

– The friendliness/helpfulness of the service and the price/class level of the hotel don’t correlate. My favorite 1* Motel 6 has consistently lovely staff but most places have a mix of snarky staff and nice staff.

– Why don’t they put pool towels in your room? There is only one hotel I’ve stayed at that had pool towels in the room. This seems more sense than having the towels poolside and making guests walk down to the pool naked. It’s not like there are changing areas poolside generally.

– I hardly ever get any service during my stay. I’d rather not have someone in and out of my room and I don’t generally need anything. The housekeeping staff seem very concerned about this! They’re often like “Are you sure? Not even any towels? Any soap?”

– A ton of people don’t eat dairy so why don’t they offer a nondairy milk at breakfast?

– No ingredients labeling of breakfast foods e.g., no attempt to have a gluten free, kosher, or vegan option at breakfast.

– The wifi. Seriously there are problems with it more often than not. (The front desk resetting the router usually restores service.)

– The housekeeping staff STILL knock on the door when the do not disturb sign is up. There needs to be an “I don’t need service today” sign so they’re not confused about why the sign is up.

– I’ve never been made to wait till checkin time to checkin. If there isn’t a room clean yet, the wait has generally only been short. However, I don’t try to checkin at 7am. It’s usually around 1pm.

– They don’t seem to mind if you want to change rooms if a better room becomes available. On one occasion they let me use a room prior to the official checkin time that was next to a noisy elevator, because I needed to make a work call, and then I changed to a better room an hour or so later.

– Some rooms don’t have fridges but where rooms do have fridges, microwaves are becoming more common. If not in the room, there is usually at least a microwave available for guests in the lobby.

Previous Post: The Strange Trend Sweeping US Hospitality Services
Next Post: 7 OUTSTANDING Travel Deals I Got This Month