I’m thrilled to have had the opportunity to interview Brent Ridge – who won the Amazing Race with this partner Josh.

I have been following the adventures of The Beekman Boys since long before the Amazing Race.

I devoured , Josh’s hilarious memoir of life in NYC, and I think my whole family have read it at this point.

– sitting on my bookshelf. I love seeing a gay couple being portrayed on TV in a normal light.

I was thrilled and surprised when they turned up on the Amazing Race!

I have a love/hate relationship with the Amazing Race and every week I watched this season, I kept thinking, I’m going to stop watching if Josh and Brent get eliminated this week. They never did – they won!

I emailed Josh and Brent to see if I could interview them (prior to them winning). Brent wrote straight back and said yes! Thrilling!

Kate: What didn’t we see?

Brent: There are literally thousands of hours of footage for each racing team, and even over an entire season, you really only see less than one hour of edited footage, so there’s a lot you didn’t see! The world and the experience is something that just can’t be described in a few short words.

Kate: What was your most romantic moment on the race?

Brent: For us, it was probably our Muslim Country Kiss http://beekman1802.com/muslim-country-kiss/ 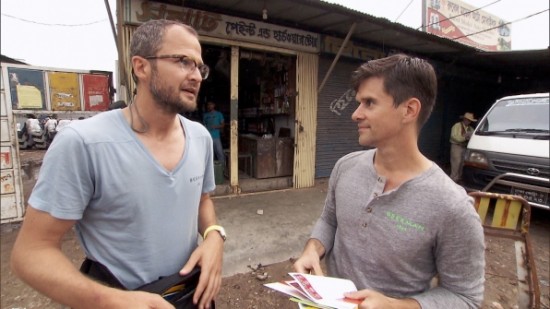 Kate: What was your most stressful moment on the race?

Brent: The most stressful moments in the Race are always when you are on an airplane with one or more teams and you land and jockey your way off of a plane and take off running as soon as you hit the air bridge. De-planing is always kind of anxiety-provoking even when leisure traveling, but having to go from zero to 60 in a matter of seconds makes the adrenaline levels soar

Kate: Did you learn anything about each other from racing together?

Brent: Had we not had the experiences we had over the last 5 years: losing our jobs, starting a new business (Beekman 1802), pulling ourselves up by our muck boot straps, we may have never had the confidence to run the Race. Now we are more certain that whatever we set as our goal is within reach as long as we are working together.

Kate: What surprising tip would you give to future Amazing Race contestants that might help them win?

Kate: Which destination from the race are you most keen to go back to for a vacation?

Brent: We would love to go back to Istanbul and Barcelona—soon!

Kate: What are you focused on now the race has ended?

Brent: Josh will now move to the farm full time and we will both be working to grow our company. We’re also developing a project to help other small farms pay off their mortgages.

All of our plans are described in detail here http://beekman1802.com/7-billion-thank-you-notes/

Previous Post: The Time I Went to a Vietnamese Wedding (And Why I Loved Vietnam)
Next Post: Why Move to New Zealand – A Guide for Americans