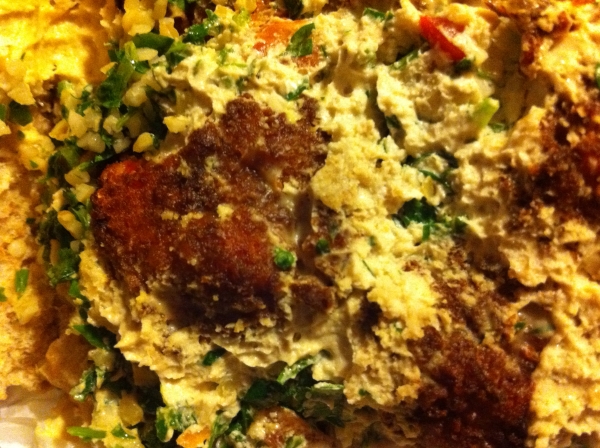 Every time I know I’m going back to NYC, I dream of Taim falafel. I love this place so hard!

It’s cheap. Under $7 for a falafel sandwich. I have a standing order.

Red falafel (Their flavors are red, green, and harissa. The red flavor contains red pepper.)
on wholewheat
with no cabbage, no Israeli salad
but with tabouli and extra tahini
Hummus is also included as standard.

I love that they have wholewheat pita as an option, although this does run out some nights.

They’re only open until 10pm, which seems a little strange to me given that falafel is so good for the late night munchies (the 10pm close is possibly due to the neighbors not allowing a later close).

There is virtually no seating (only a couple of bar stalls) so I always get takeout. There is a bench outside the front door that provides a little bit of seating but this is also often crowded. I usually take mine home on the subway and it is none the worse for wear (the sandwiches are wrapped in foil). There really isn’t any good seating nearby (at least not that I’ve found).

– The pita is incredibly fresh tasting.
– The falafel is flavorful.
– It’s a super filling meal. If I get one of these, I usually don’t eat much the rest of the day. That said, it also feels super healthy. Their hummus seems low fat unlike some hummus that leans toward being an oil slick.
– The staff are nice.
– Their Tabouli salad is awesome and the recipe is online (video below, which has the recipe), so I have actually made it myself and it tastes just like the one they serve.

– Only the seating issue.
– Is a little bit of a walk from the nearest subway, but only 10 mins. Use your phone to navigate or you’ll get lost. Can be a bit confusing to find as the streets in the West Village are confusing.