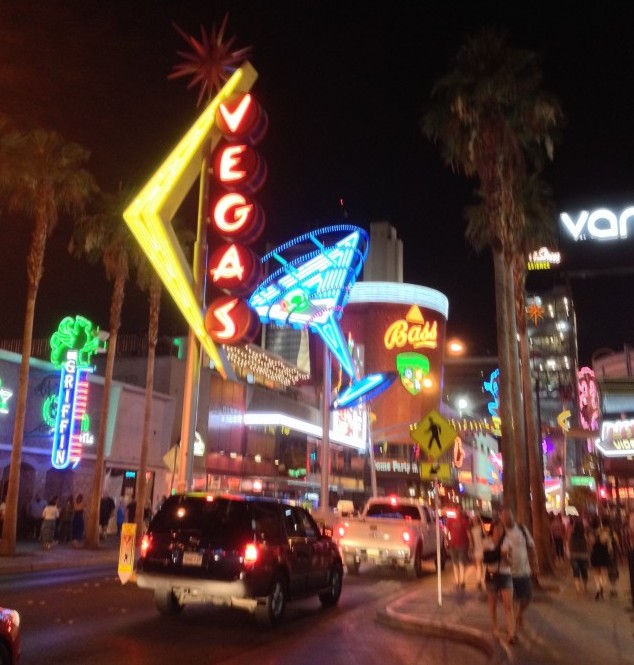 Travelers are really big on ‘living like a local’ when they go to Europe and other parts of the world. You can do the same thing right here in the US, if you know where to look. Now that we’ve been based in Vegas for a few months, we’re starting to gradually discover where the locals go…. and it isn’t the famous Strip. 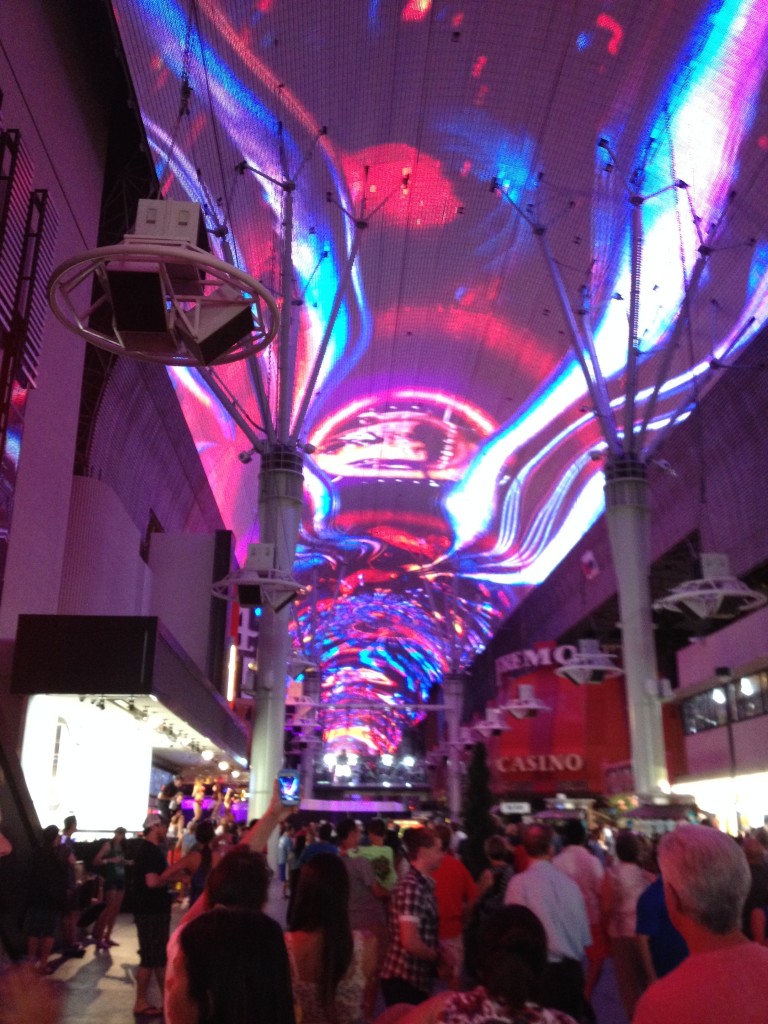 When we go out for a night’s entertainment, it’s usually to Downtown Las Vegas. Our number one stop is usually the “Container Park” which is an outdoor space surrounded by small stores, bars and restaurants fabricated from shipping containers that are 3 stories high. Within the large courtyard setting there is a great playground, plenty of places to sit down and enjoy a cool beverage, and a music stage with grass seating. Lush grass is a rarity in Las Vegas so it’s lovely to sit on the lawn and enjoy the entertainment. There are almost always good bands playing at night on Fridays and Saturdays. Occasionally there’s a charge to get in for a special event at the music stage, but mostly it’s free. At the entrance to the park is a giant mechanical Praying Mantis that shoots off flame throwers from it’s antennae. The Container Park is an awesome place to chill out and have a causal Friday night. 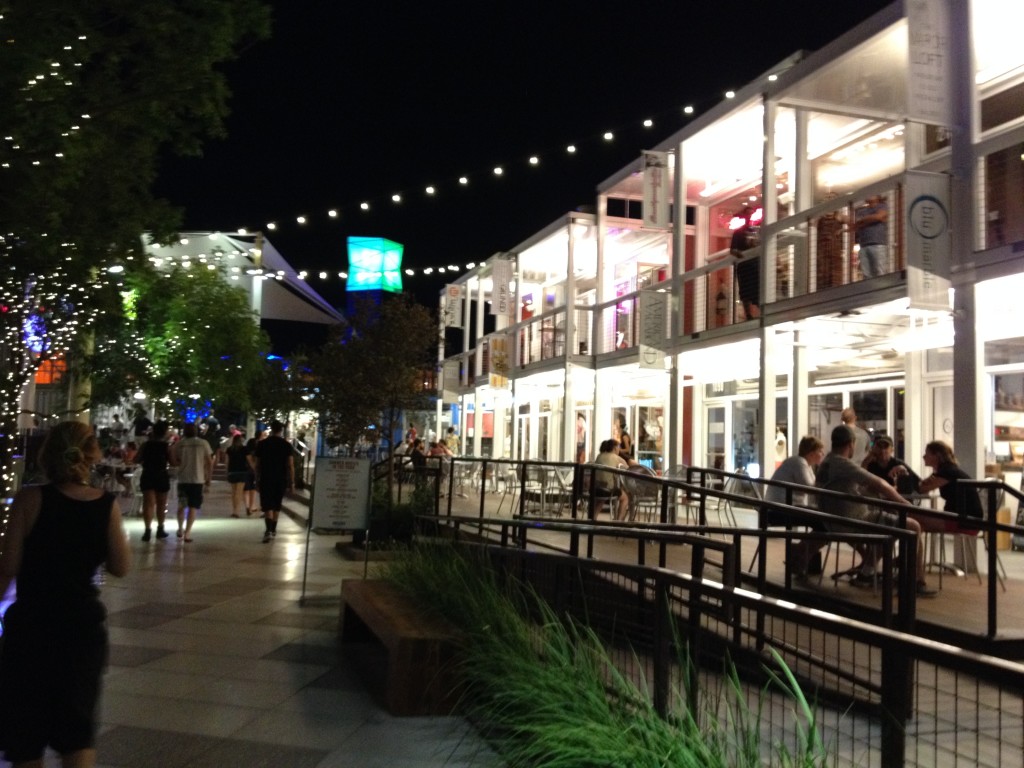 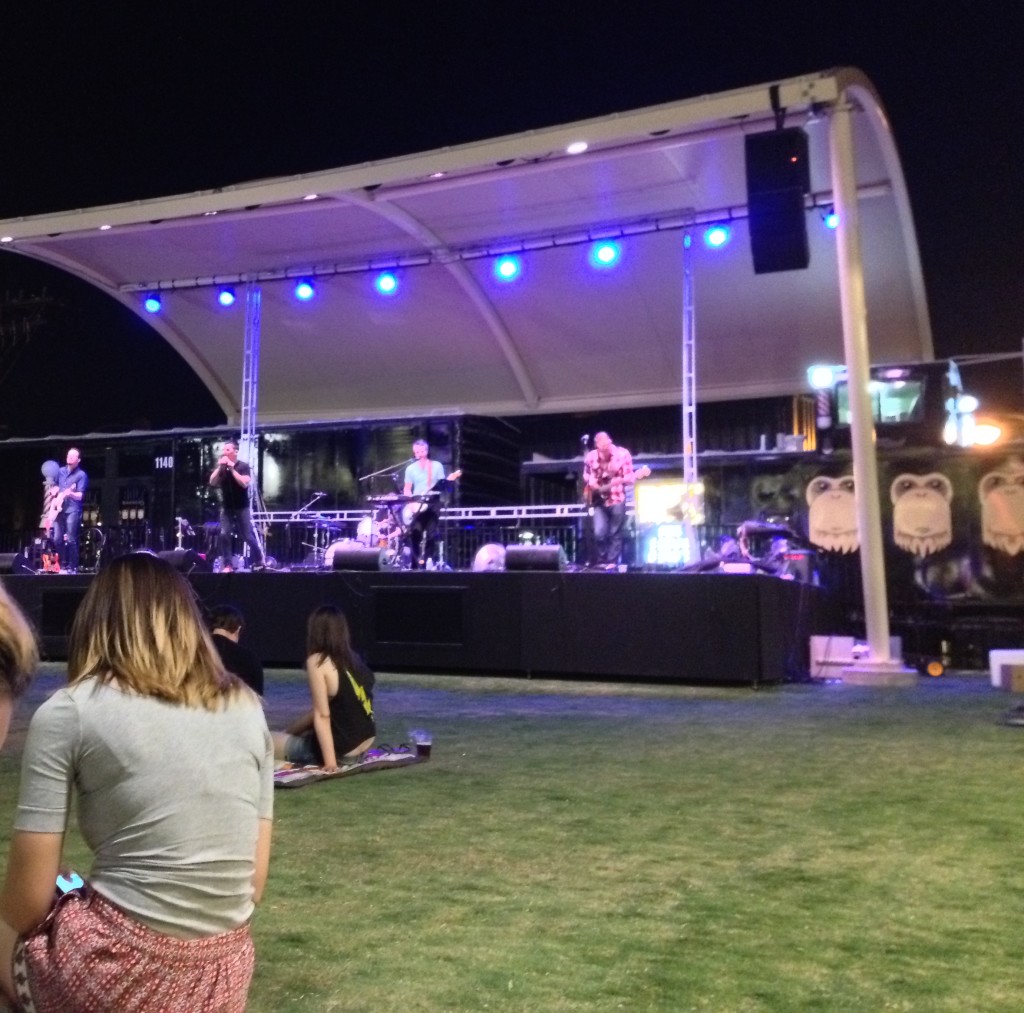 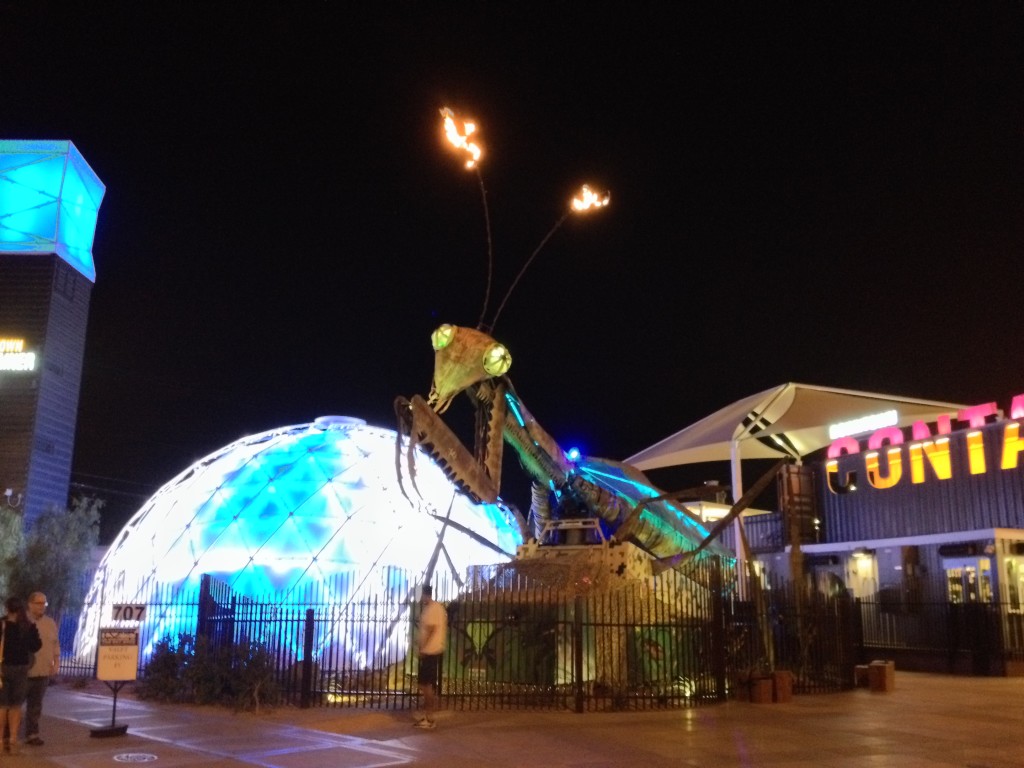 We also like to go hang out at the Gold Spike. The Gold Spike was a casino but all the gambling equipment has been removed and replaced with other fun stuff. Hot tip: Go out the back, past the rest rooms. You’ll find a tiny house, an Airstream, most likely a band, a bar, and people playing various quirky types of games like giant chess. It’s a really fun atmosphere. Lots of the residents of the building just go downstairs when they want to party so it has a slightly college dorm vibe, but much more 30-something and classy. Inside at night is pretty loud, but during the day the interior is a cool place with wifi to hang out. 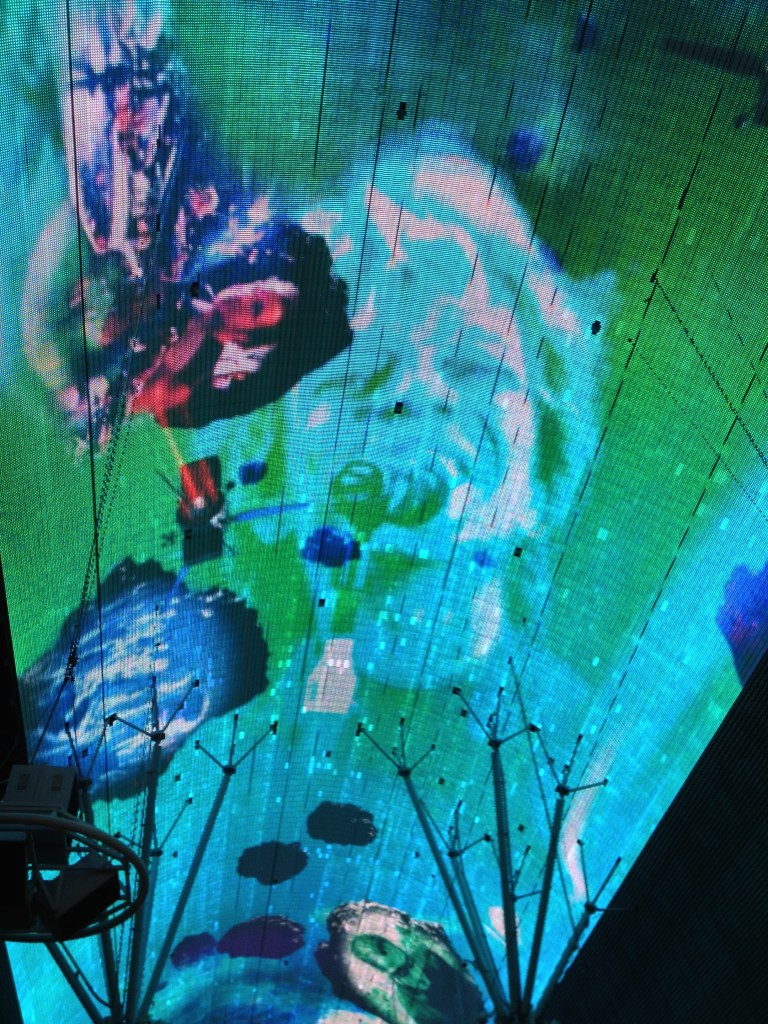 Tourists usually go downtown for the ‘Freemont Street Experience’ an automated light and music show projected onto the arched ceiling of a pedestrian mall which spans several blocks. There is also a zip-line which flies overhead for those wanting a bit of extra fun. Honestly it doesn’t do much for us. We prefer walking East along Freemont Street to where you’ll find locals and in-the-know tourists. We love the old-style neon lights and, when we occasionally gamble (literally $1-2 total!!!), it’s usually at the El Cortez, which is super old school, and super unfancy. The slots there seem to be lucky for us and the odds are better than on the Strip. 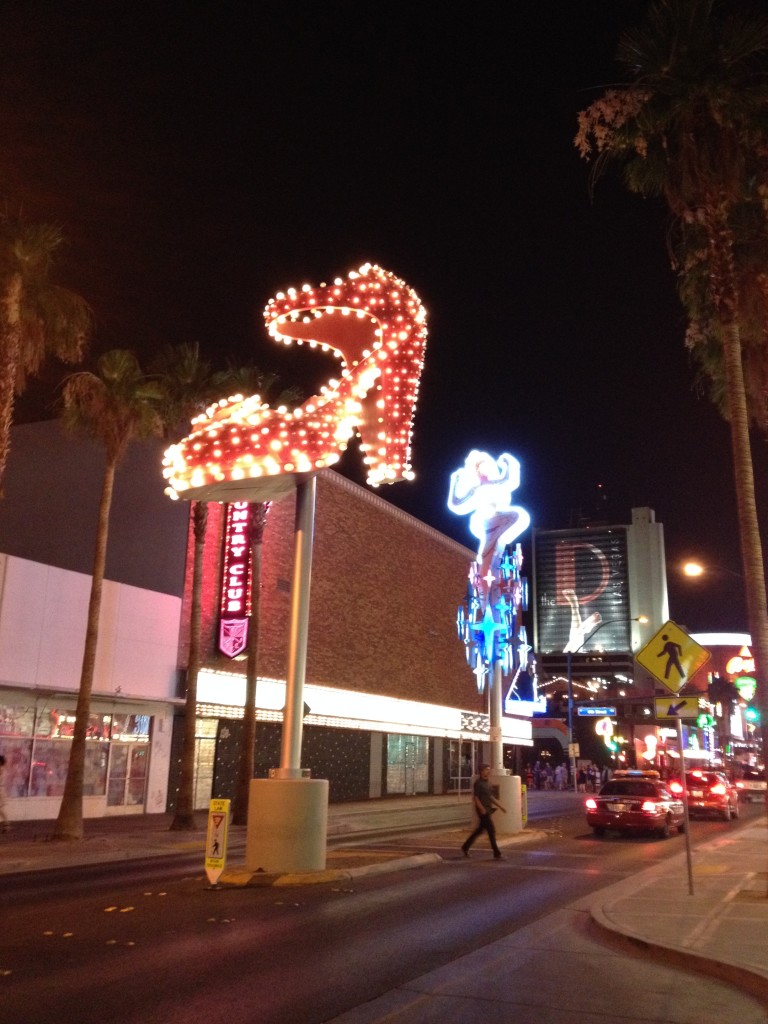 Another place I enjoyed visiting was the retro casino lounge on the first floor of the D Casino where all the gaming machines are vintage. You can easily take the bus from the Strip up to the Freemont Street and the walk to the Container Park is less than 5 minutes. 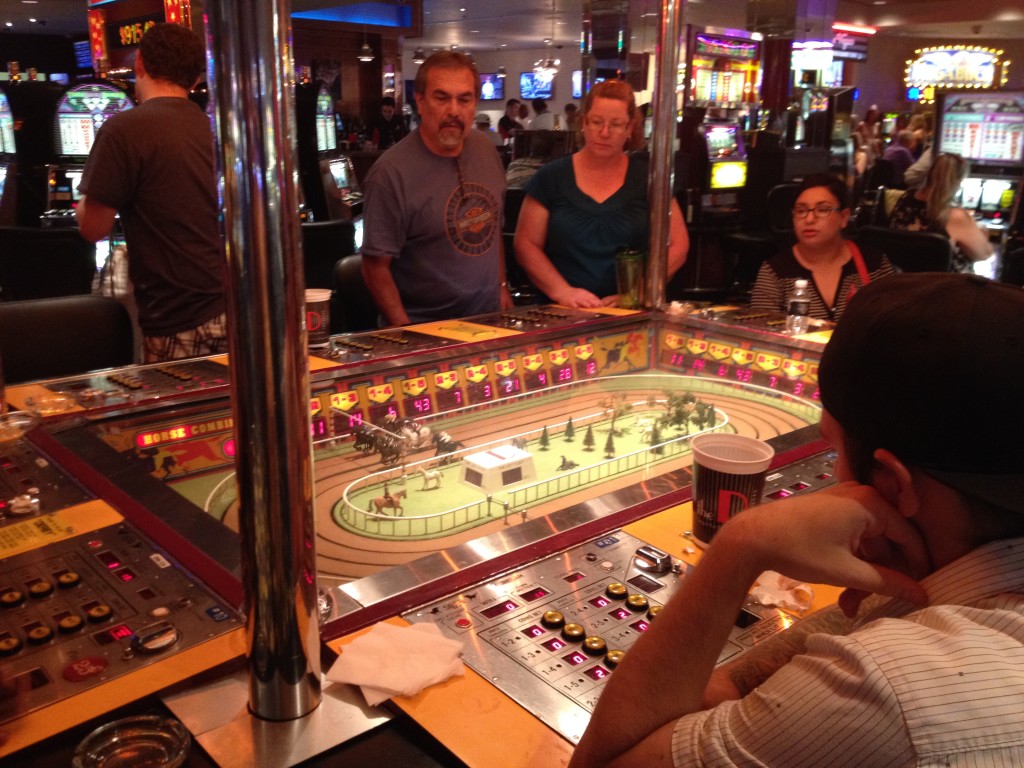 Downtown is the most fun at night but if you’re around during the day, you can check out The Beat coffee shop or any of the new stores popping up, like O Face donuts (yes, it’s Vegas so lots of things have an adult edge ;-)). They have some vegan donut options each day but may be sold out if you don’t go early.

If you’re in the mood for intellectual stimulation, check out the various Downtown speaker series. The talks take place at the Learning Village, right next to the container park. There is a ton of good stuff on. Most months they have a entrepreneurship/tech themed speaker series that takes place on Thursday and Friday of the same week. It’s called Catalyst Week, but it seems to have finished for 2014 now.

Vegas is a great place to come for guiltless fun. I love the big lights and especially the Bellagio fountain and the Mirages’ volcano. But when you are “over” the hype of the Strip, head downtown for a real authentic Vegas experience. It’s easily accessible from any Strip hotel without a car.