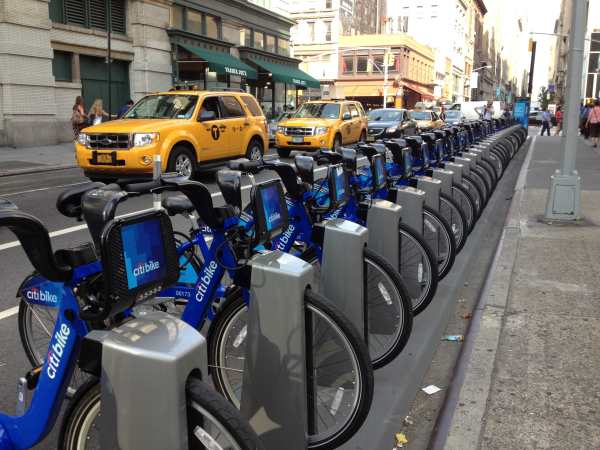 Citi Bike is the new bike sharing scheme that started in Manhattan and Brooklyn in May 2013.

Kate and I were lucky enough to win two free Citi Bike day passes at NYC’s recent Summer Streets. As a brief aside, Summer Streets is a wonderful annual event. For 3 consecutive Saturday mornings in August, Park Ave from 72nd St all the way down Lafayettte St to the Brooklyn Bridge, is closed to vehicles and becomes a thoroughfare for bicycles, joggers and walkers. There are a lot of fun activities and free give-aways along the route. 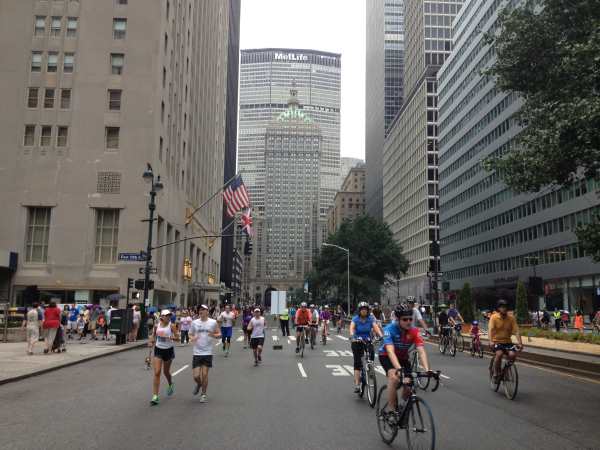 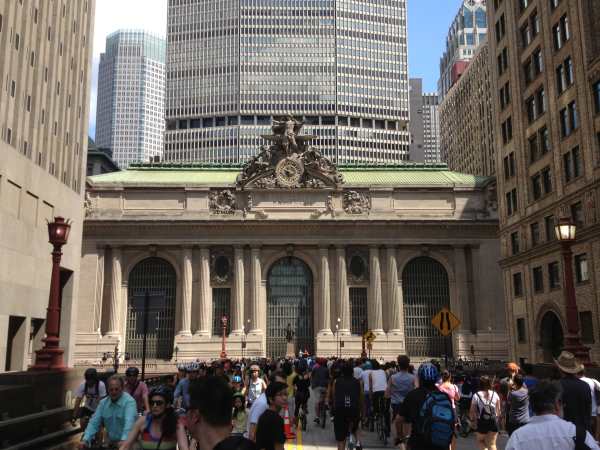 On a glorious Summer’s day in late August we decided to have our first Citi Bike experience. I’ve got to say, it wasn’t plain sailing!

After my Citi Bike experience these are my opinions on the scheme.

1. Citi Bikes is great if you want to travel short distances from A to B. I would not recommend to tourists exploring the city by bike. It was just too stressful getting the bikes docked every 30 mins. I think it would be better for tourists to rent a bike for several hours or a day from a bike rental company, or accept paying overtime fees for Citi Bike (which still may work out cheaper). If you’re in town for a month, you could also consider buying a bike from Target (they start around $150. There is no Wal-mart in NYC).

2. You must have a smart phone loaded with an app with Citi Bike station locations on it. Despite there being 300+ stations in Manhattan and Brooklyn, you cannot be sure of finding a station on time if you are unfamiliar with the area and don’t have a location app.

Here is what transpired to bring me to these conclusions.

Before we left the apartment Kate downloaded the free Citi Bike app to her Iphone so we could locate the nearest bike station. The station locator on the app didn’t work which wasn’t a good start so we downloaded another app called Bike Share that did work. The nearest bike station was only 2 streets away so that was very handy. The console was easy to use and we were given a simple number combination to plug in to release the bike from it’s dock. You only have 5 minutes to do this and we must have been a bit slow, because Kate’s didn’t work and she had to get another number.

We had our own bike helmets (previously obtained from NYC’s Department of Transport for free) and were soon enjoying our ride down Broadway on the cycle lane.

If you purchase a year’s membership of Citi Bike you get to use a bike for 45 mins at a time. For casual users and day pass holders you only get 30 minutes before the bike has to be docked at a station again. Anything over 30 minutes and you get charged overtime fees.

You soon realise that 30 minutes is not a long time!
After 20 minutes you need to start looking for the next station. This does detract from the enjoyment of the ride. With a few minutes left on the clock I then had trouble docking my bike. I had to try 3 different docks before it would click into place. If you want to continue cycling as we did, you then need to re-dip your credit card in the console and get another number combination. It is a very start and stop affair.

We docked our bikes for the second time down at Union Square and had look at the stalls and shops. Kate was feeling a little unwell and decided to go home on the subway. I wanted to do more cycling so I carried on on my own. Trouble was that Kate had our one cell phone with the subway app on it. Still, I felt confident that I could find a bike station if I started looking after 20 mins.

I had a wee ride around Gramercy and discovered beautiful Gramercy Park in it’s full Summer splendour. My first bike docking went fine but after that things didn’t go so well. I decided to head west across town on 23rd street to see the Hudson River and enjoy the Hudson Greenway bike lanes. With 10 of my 30 minutes left I started looking for a docking station. Surely I would find one on the Greenway as it was packed with cyclists including “citi bikers” like me? The Hudson River was sparkling in the sun and the piers were a hive of activity but I couldn’t enjoy it as I was becoming increasingly distressed at not being able to find a station. There were no stations that I could see on the Greenway between 23rd and 42nd St. With 3 minutes to go I headed back up 42nd St but got caught in traffic lights. Finally I found a station on 42nd and 8th Ave – four minutes overtime! I was worried that I might be getting charged $5 a minute late fee but it turns out to be only $4 for the first half hour overtime so that was relief. 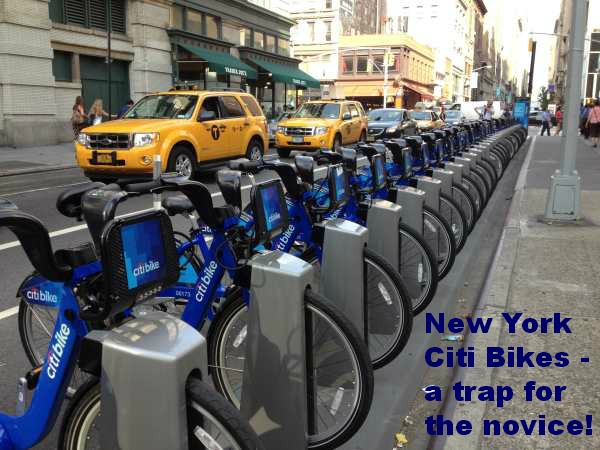 Previous Post: 10 Tips for Planning a Theme Park Trip to Orlando
Next Post: Touring Europe By Car : Fond Memories and Tips For the Present