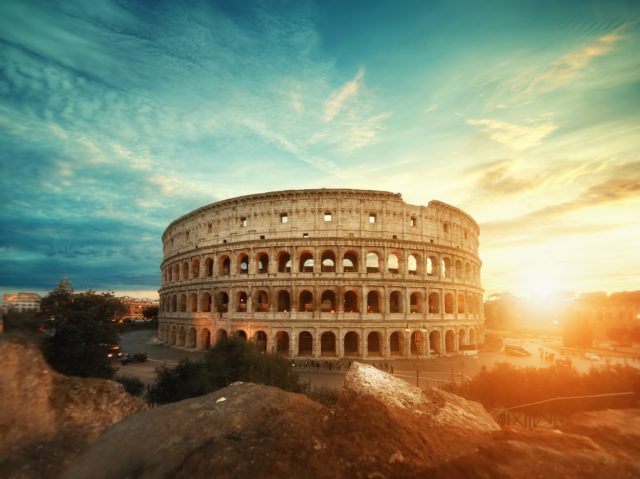 Rome is one of the busiest and best-known cities on the European tourist trail. Its cultural history is second to none, and the Colosseum is one of the most famous structures on the planet. Another amazing feat of Roman architecture not to miss is the Pantheon, with it’s extraordinary dome with central open oculus which allows a large beam of sunlight to stream down within the interior of the temple, now church. The Pantheon is one of the best preserved buildings from Roman times and was completed under the rule of emperor Hadrian in about AD126.

So culture, luxury and sophistication are all words that you would expect to hear in connection with Italy’s glorious capital. But affordable at the same time? You might find that a little harder to believe, but if you know where to go and you book smart, Rome on restricted funds does not have to restrict you to budget hotels and rubbing shoulders with impoverished students for a bite to eat.

Rome has the usual range of luxury hotels that you would expect to find in a capital city. They also have room rates to match the most popular destinations in the world. But there is an alternative to the opulence of, for example, the JK Place Roma, with its $500 per night rates.

Rome has a fantastic range of boutique hotels that have all the luxury, double the character and charge a fraction of the cost. Hotel Nerva is a perfect example – it could not be better situated within walking distance of the central attractions, yet room rates can be as low as $100 per night. With just 19 rooms, you get far more of a feeling for the real Rome, and the breakfasts will keep you going all day. Who could ask for more?

Soaking up the sophistication of the Italian opera

What could be more sophisticated than a night at the opera? If you’ve never been because you’re “not into it,” you don’t know what you are missing. From the moment you walk through the doors of Rome’s magnificent opera house, you are transported into another world of luxury and opulence. You could also experience the wondrous experience of an opera “under the stars” within the ruins of the Roman Baths of Caracalla.

Contrary to what you might have been led to believe, you don’t need to invest in a tuxedo or gown – not unless you really want to, anyway – and if you purchase in advance from a site like romeoperatickets.com, tickets are far more affordable than you might think.

Italy is famous for its gastronomic delights, and there are so many wonderful restaurants throughout the city that it can be hard to know where to turn. For a luxurious meal from a top chef who really cares that will not send your bank manager into a cold sweat, try Osti Matti on Via Assisi. The owner, Sabatino, greets guests personally and speaks fluent English. Meals are prepared using local ingredients, and locals and tourists alike cannot get enough of this hidden gem.

For something a little less formal, perhaps if you fancy a quick bite after your night at the opera, you can get the best pizza in Rome at La Pratolina a buzzing, vibrant evening-only pizzeria that is just a ten minutes walk from Bernini’s piazza. The unusual oval shape is inspired by a style of focaccia popular in Ancient Rome, and the secret flour mix and lavastone oven combine to make a pizza unlike any other.

Photo by Willian West on Unsplash