When we imagine “New York” the image that almost exclusively pops into our head is that of New York City. NYC is one of the biggest cities in the world, and probably the most famous one, with a skyline and collection of attractions that are recognizable to just about everyone. It’s bursting with exciting things to do and see, and thus an extraordinarily busy tourist destination and an item on many people’s travel bucket lists. But if there’s a downside to how popular New York City is, it might just be that the incredible state it resides in is sometimes overlooked.

New York State is actually a beautiful place filled with gorgeous getaways and a great deal of natural beauty. Also, with the crowds drawn to the city, it can make for quite a peaceful vacation. If that sounds appealing, here are some of the destinations around the state to consider.

Given that New York City is right on the water and dominates the attention the whole state receives as a tourist attraction, many may assume that there isn’t any traditional beach space to be enjoyed. That couldn’t be further from the truth! For starters, famous spots like the Jacob Riis Park, Long Island, and Jones Beach offer sandy stretches immediately outside the urban sprawl. But this list of the state’s beaches reveals a number of other appealing areas up and down the New York coastline where visitors can enjoy serene coastal space.

The Adirondacks are one of those almost-mythical destinations that you hear about people visiting but never quite get a firm understanding of, like Lake Tahoe or British Columbia (at least, that’s how the region is to me!). Basically, the Adirondacks are a stretch of forest-covered hills and mountains in the northern part of the state near the Canadian border. They’re best known for pristine natural beauty and a range of outdoor activities for visitors, particularly when the weather is warm.

Did you know that New York has actually become a fairly prominent state for the production of wine? Many don’t realize this, and while New York hasn’t yet reached the status of, say, California or Oregon in this category, it is definitely on the map for U.S. wine production. As tends to be typical of areas known for vineyards, the wine-producing regions in New York are something to behold. And that’s where the Finger Lakes come in! The region has rolling hills clad with vineyards, award-winning wines and spectacular views.” Sounds like a nice relaxing place to rent a cottage or find a comfortable hotel, no? 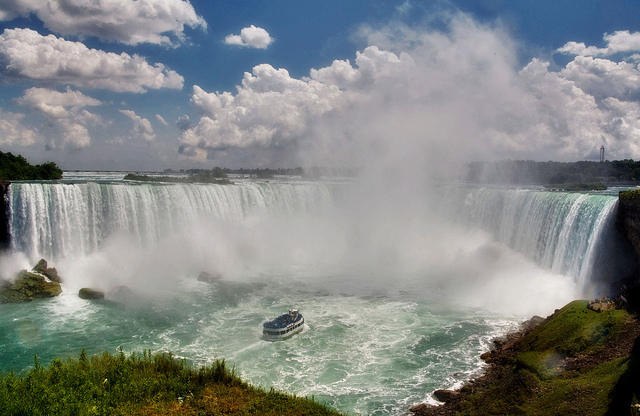 Arguably the most famous stretch of waterfalls in the world, and certainly in North America, Niagara Falls is partially located in New York—a fact that many people are surprisingly unaware of! The falls account for a portion of the U.S.-Canada border between New York and Ontario. This isn’t so much a destination to spend extended periods of time, as you might in the Adirondacks or at the Finger Lakes, but it’s as stunning an attraction as you’ll find in the northeastern United States.

Albany is sometimes shrugged off, as can be typical of state capitals that aren’t the highlight cities of their own states (think Sacramento compared to Los Angeles, or Tallahassee compared to Miami). But in actuality, Albany is a pretty fascinating city on its own, hosting a range of cultural attractions like the Albany Tulip Festival each Spring and the Albany Riverfront Jazz Festival in the Autumn. The state capital has some fine examples of colonial architecture, for example the Center Square/Hudson–Park Historic District.
Any of these destinations can make a trip to New York well worth your time, even if you don’t set foot in the big city!